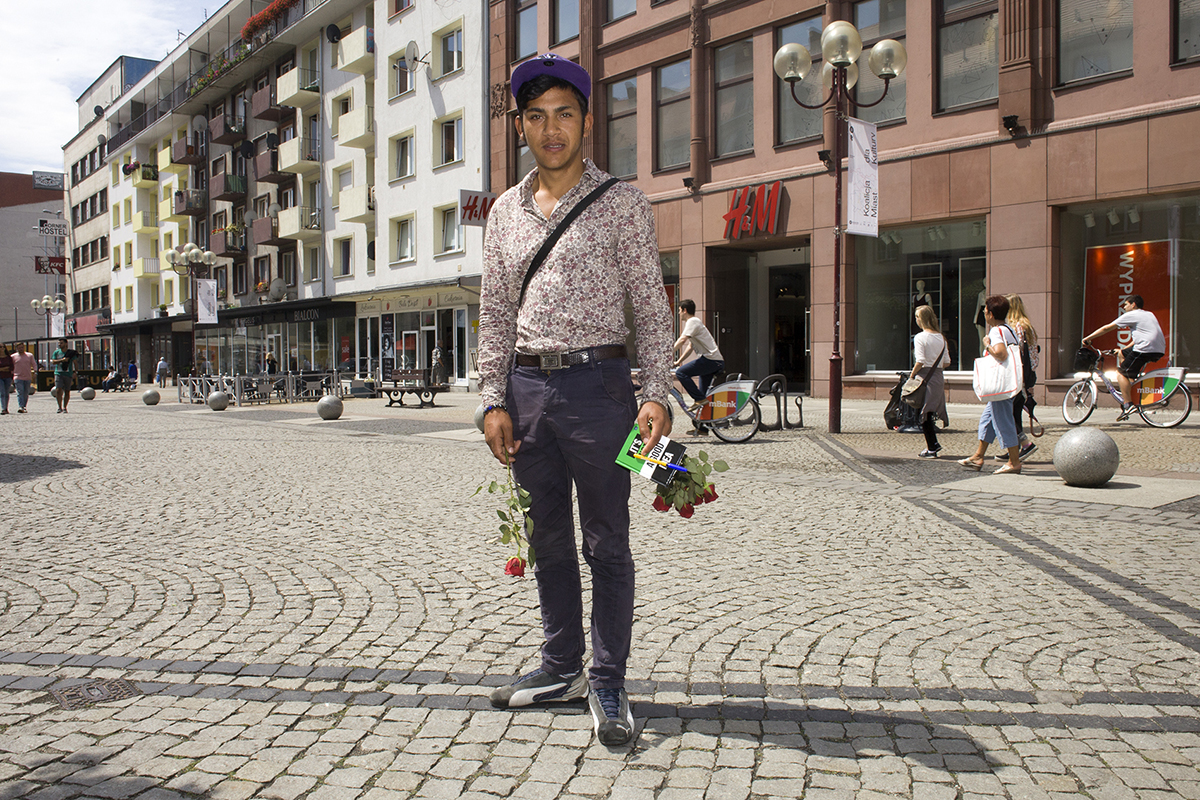 Wroclaw, June 2016 - How to change your mind? Why people have fixed ideas about others in their minds? How to sell roses? A collaboration with Herman Ciurar and his family. Interior of the barrack. On a small portable table stands a vase with a rose. Visitors were invited to write reflections on #YOUAREAROSE in a booklet. 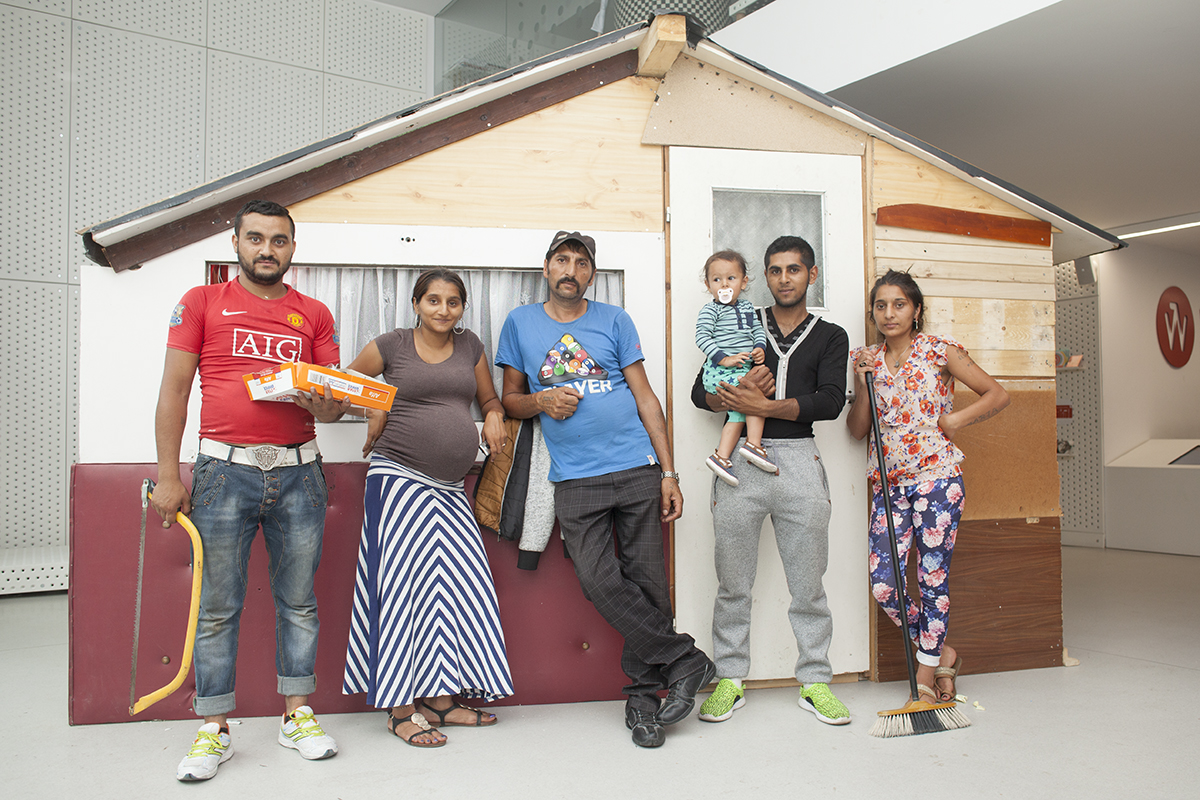 The building team. Herman carries his son on his arm.

#YOUAREAROSE started in Juni 2016, when I returned to Wroclaw on invitation of A-i-R Wro, to work on a sequel to HOW TO START TRYING TO ACT AS IF THERE'S GOING TO BE A FUTURE?, as produced in November 2015. Then I collaborated with Herman Ciurar starting from the settlement on the outskirts of Wroclaw, Herman lived in. Now, the focus was on roses, as sold by Herman and his family on Rynek and Swidnicka, the Wroclaw main square and the main shopping street.

Herman, part of a group of Romanian Roma, wondered: "I don't know why people have these fixed ideas about us without knowing us. How to start becoming a citizen of Wroclaw? How to become a neighbour of the people living next to us?" We talked to members of the Roma community living in the Koczowisko - Polish for temporary settlement - at Ul. Kamienskiego in Wroclaw. Toghether with Stoica Ita, Petru Calderar and some other members of the community, we decided to build a barrack, like the ones all Roma live in at this settlement, in Barbara, in the city center. This barrack is the starting point of an open collaboration in July 2016 with others: citizens, other artists, policy makers, journalists, researchers. Working like this people will show their feelings and thoughts towards the subject.

To help us, we invited Piotr Gardecki, painter, to paint some roses, and Diego Pileggi and Agnieszka Bresler, Jubilo Theatre Group to organize some workshops. This framework was used to work on an intervention on Rynek. The barrack was used as a canvas for quotes related to rose selling. This text was used by one of the salesmen, to explain what he needed the money for. Regular citizens from Wroclaw asked: why stick to selling roses? This was happening now for some years and appeared not to be very successful. Why not change strategy? 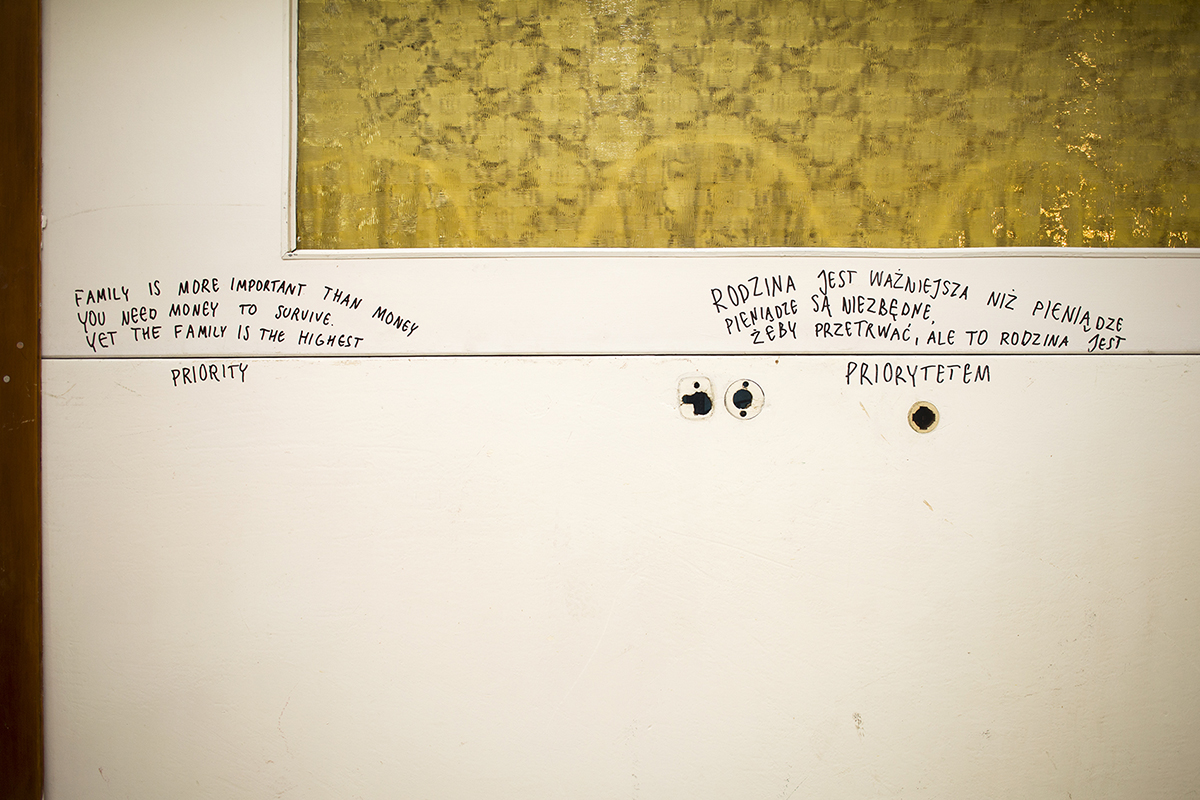 Herman and other family members explained that the roses were not so important. It's all about searching for money for daily survival. Roses are just beautiful flowers. 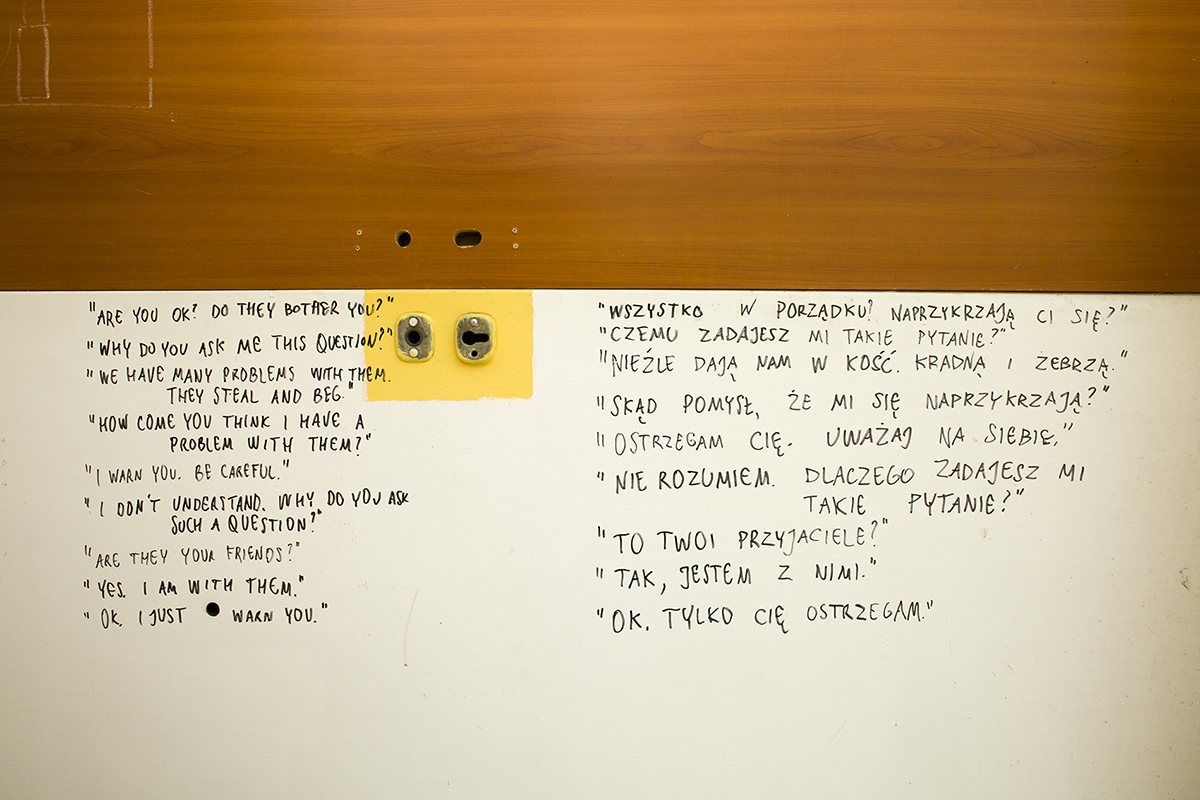 Being with Herman and his family on the street, I was stopped by a police officer. This was the conversation I had with him.

This text was used as an introduction to the installation:

Some people grumble that roses have thorns; I am grateful that thorns have roses.
Alphonse Karr

#YOUAREAROSE is about you - because you know the story: walking on Swidnicka someone offers you a rose. You accept the rose. Suddenly you are invited to give money in return. You are confused. You search for money, give it. With the rose in your hand you walk on, still confused. You learn from your confusion. So next time when a rose is offered you respond differently.

#YOUAREAROSE is about them. Who are these people selling roses? Why are they doing this? How do they live? Together with some of the men selling roses a house is built in Barbara, like the barracks these people live in, here in Wroclaw. Questions and thoughts related to rose selling are written on the barrack. The interior of the barrack is nicely decorated by some female rose sellers. Inside the barrack a simple table carries a vase, in it a single red rose.

So in the end #YOUAREAROSE is about roses. In between you and them, in between us, is this simple moment of confusion, in which the red rose is exchanged. We can’t blame the rose. Maybe we don’t like the thorns. But in the end we all like roses.

July 2016, in a series of workshops organised in close collaboration with Herman, his family and Jubilo Theatre Group, the rose was researched as an object in intimate and public space and as an experimental object. On the final day of the exhibition the Parade of Roses was organized: together with Herman, his family and all people involved in the workshops, we took the portable table with the vase with the rose on top of it plus lots of roses to the market square. Overthere we gave away roses for free, asked people to pass the rose to someone else and join us in our walk back to the barrack. 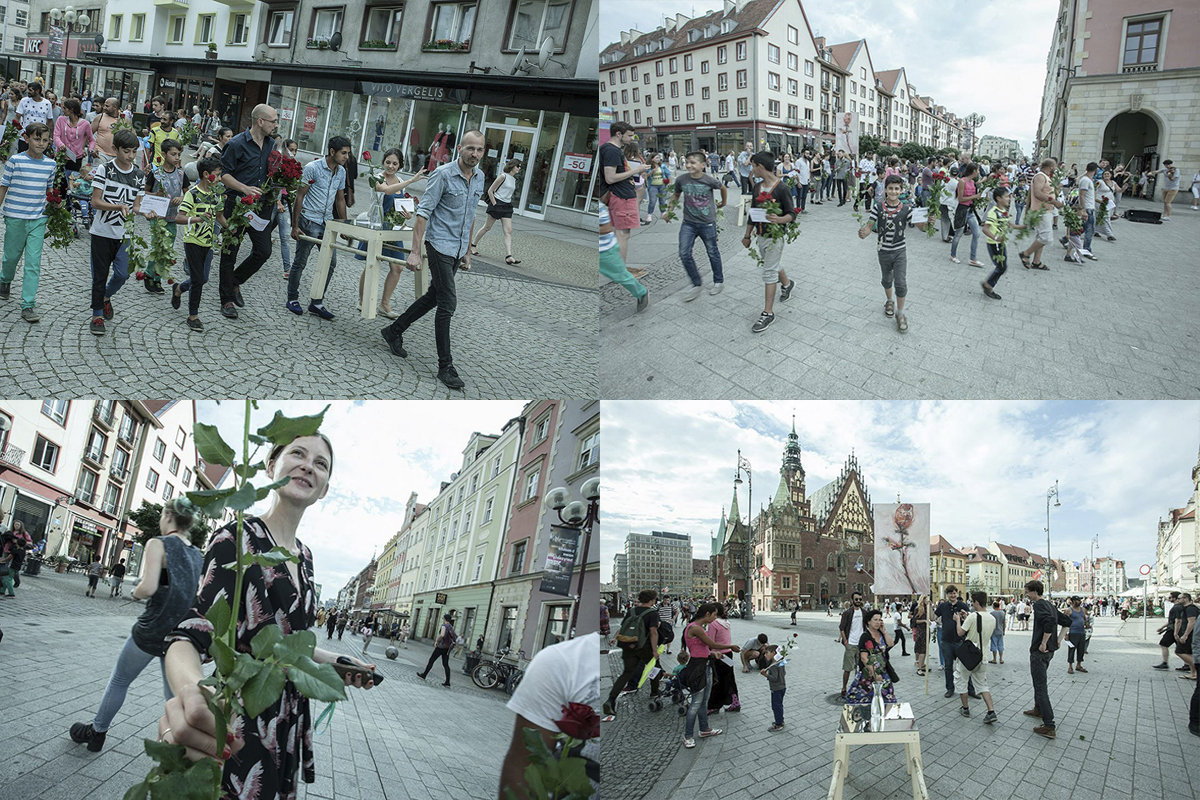 #YOUAREAROSE finished with the Parade of Roses on Rynek. For one day roses were given for free. People were invited to come with us to the barrack. Photos: Kris Cwik.
Powered by CouchCMS